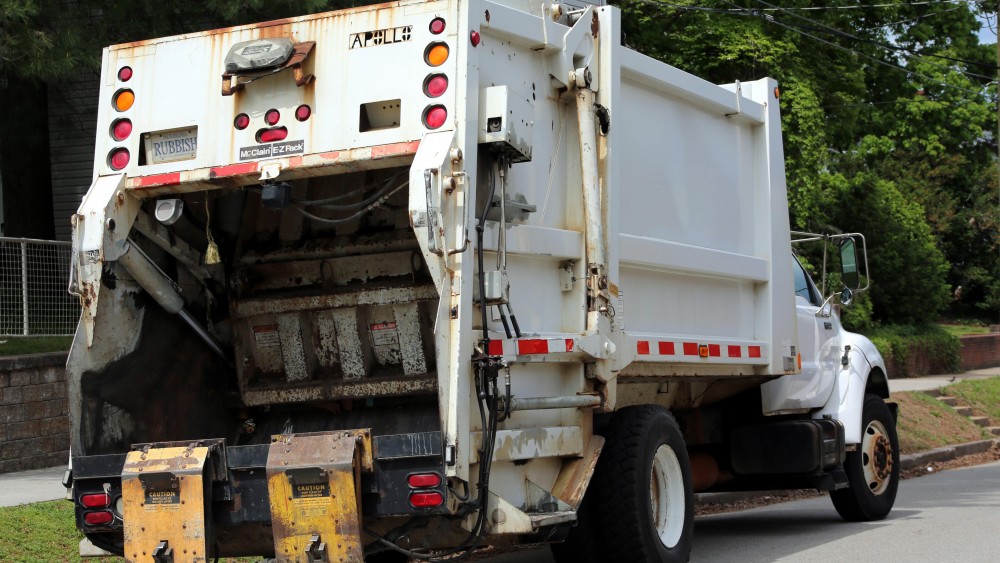 The Dance of the Garbage Man

A few days ago I pulled into my driveway just as the garbage truck slowed to a rolling stop in front of the house. I got out of my jeep and walked to the end of the driveway as the man dangling off the back let go of a handle bolted to the side of the truck, hopped down from the girded step, picked up my can and with an agile pivot, emptied it before setting it back down on the sidewalk. It was a pretty fluent maneuver. Honed, I’m sure, over time. It only took a few seconds before he hopped back up to this perch, before grabbing the truck’s side handle once again. Lifting my emptied can, I thanked him.

“No one’s ever thanked me before,” he laughed before giving me a wave parting wave.
At this point the truck was advancing slowly to the next collection of green bear-proof cans (all clawed, pierced and crushed by bears). I took a moment to watch as he performed the exact same pivot routine. It was pure theatre. He was in great shape, and what I noted more, was his great spirits. He was a burly dude with a well trimmed red beard and moustache.

The truck itself was a thing of beauty. White. Clean. No dents, scuffs or hanging bumpers. I didn’t get the opportunity to see the driver, but the dancer at the back was wearing stylish safety wear. I know this man now. We made a human connection.  A man I’ve seen many times over the years but remarkably took little notice due to preoccupations and self-absorption.

Standing there with my trash can, it occurred to me that I don’t particularly have many opportunities to swing off the back of a moving vehicle. It seems like it would be a cool way to spend the day – outdoors, taking the two step pivot – almost like ballet. It’s a physically demanding job that could conceivably help me to stay fit. Getting fit is on a long list of things I should do.


“Can I press the red button?”

I was thinking about asking my wife to marry me again. Renew our vows and such but then I thought better of it. She could see that this as an ‘out’ and leave me faster than a whirling dervish. I mean, I’m not the same spectacular catch I was when we married in 1990.

I was never what most people would refer to a physically fit but as the time passed, so did the time of Levis with a 34 waist. My wife is a nurse. She walks about nine hundred kilometers during a single 12 hour shift. I’m a writer primarily. A wordsmith, not a blacksmith. Blacksmiths must be in decent physical shape as they hammer away. I don’t hammer. I don’t own a hammer. I’ve seldom needed a hammer. As a writer I can go hours barely moving and body part other than hands.

For many, the workforce has transformed into a pretty sedentary scene. Computers have sidled into many of the manual factions of employment. We now find ourselves spending hours entering data, emailing, texting, video conferencing and looking for darkened office corners to try a catch a few winks after have three pieces of cake that was brought in for someone’s special day. You are not sure who this person is, but the cake is good. Sadly, its only 9:30 in the morning.

They have my utmost respect. I drink coffee while wrestling with the Queen’s English. I think I’m

pretty agile when it comes to committing the odd clever phrase to print, but that agility would not serve me well if I had to walk, lift, climb, bend, grip, twist, turn and pivot. I could probable press that one big red button that will blow something up, but sadly there is much more to it.

For those about to work, I salute you.