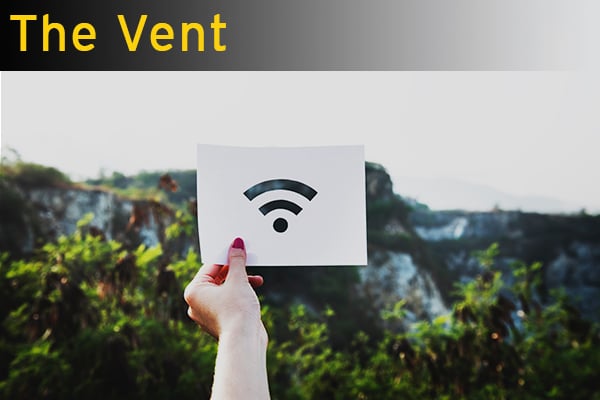 After less than a 30 second discussion with my wife, it was agreed upon in unanimous fashion that we would ditch our home phone – the one that’s been plugged into the wall on that little rickety stand since 1993. Lots of calls came through on it and a whole lot more calls went out on it. Not by me, but you know, still. Alas, no one seems to use our home phone anymore, except people selling sketchy things or asking dodgy questions. So, I was going to hack the line with scissors, but I figured I owed the phone company the courtesy of a final farewell, but due to my paralyzing aversion to speaking to anyone on the phone, it was my wife who called and cancelled. Immediately after cancelling our phone, a Loyalty Specialist called (they don’t kibosh your line immediately, they schedule the formality for a few days down the road). The call caught me at a weak moment. I picked up. I had just caught the name of the representative before she hung up on me after a bad connection. I noted the number. Three different Loyalty Specialists called over the course of three days. On the third day, I pointed out that the only people actually calling this number were from their end and after 8 pm. I was kind of enjoying the irony so I wasn’t really in any hurry to hang up, waxing nostalgic on how it will be a little sad to give up that ten-digit number that will forever be embedded in my brain. No one forgets their home phone number.

She offered to hack the monthly bill down to about 30 bucks.

“But the only people that use this phone number anymore are telemarketers and Loyalty Specialists. Can we go half on the 30 bucks?”

So, it was official. Our phone was to be unceremoniously disconnected. And it was. How did I know? It’s not like I picked it up to call anyone. So, what was the first clear indication that our home residential line was disconnected. Well, the internet went down. Damn. I forgot about that part. Using my cell phone I called our internet provider to see what my options were to get our abode back online. I was told that they will dispatch a “line’s tech” to rig up some type of “dry loop” which would allow me to still use the phone lines but not through the phone company or something. To be honest, I’m not clear on the whole process. I envision a dude dressed in black with a balaclava shimmying up a phone pole under the cloak of darkness. A scheduled appointment was called for.

“Okay”, she said. I could hear her typing while speaking. “It’ll be an all-day order. Someone will be there next Monday between 8 and 6.”

“What’s an all day order mean?”

“It just means that they have that timeframe to show up at you house.”

“Okay. Does someone have to be home?”

“Yes. They’ll need in your house.”

“So, someone will call me when they arrive.”

“No. Unfortunately they can’t do that.”

“Uh, but this is all about telecommunications. They can’t use their phone?”

“Is there anything else I can help you with today?”

“Uh, can you have the line tech guy call me when he gets to my place?”