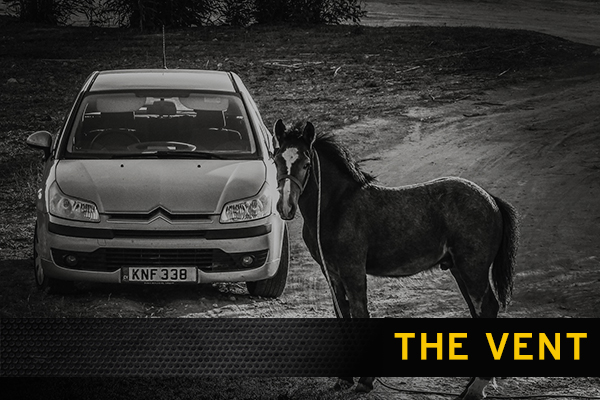 My commute for a horse

I seriously looked into buying a fully certified used horse with low mileage so I could saddle up, rear up, and then ride off on the magnificent beast in to work to save on gas and vehicle maintenance. Horses do not require snow tires, oil changes, wheel alignments or expensive exhaust systems. I’d been thinking of making the full-on change from gas to equine for some time, but after fuel hit a buck and a quarter per liter I really focused my attention on it all. So, I sniffed around town and caught wind of a local woman who runs a successful equestrian-type business & horse breeding operation on the outskirts of town. I reached out, made contact, and within 9 minutes of hanging up, I arrived in epic fashion, after doing a wicked Tokyo Drift in her driveway, spraying gravel scattershot over a few timid hound dogs. I gave them quite a fright. Although it was a dramatic Hollywood-type entrance to be sure, it was purely unintentional — my Jeep just drifts erratically at random times (which is partly why I was looking to trade it in for a horse).

After apologizing to the dogs and calming the horse woman, she shook my hand and walked me over to a massive red barn that was much nicer than my bricked bungalow erected in 1979. The woman that was selling the horse asked me where I’d ‘stable it’. I asked if I could not just tie the horse to the lawnmower under the carport? She shook her head. She asked what my plan was for feeding the horse. I asked if I could not just feed the horse table scraps or tomato soup? She shook her head. She asked me if I knew my “ass from my elbow.” I asked her if that was a prerequisite for buying a horse? I then found myself back behind of the wheel of my Jeep with no horse in under 4 minutes. Damn.

On my six-minute commute into work in my Jeep (no horse) I was listening to someone on a local morning show wax poetic about his love of hiking in the autumn. He described some pretty bad-ass hiking excursions he had been on over the years. Yellowstone. Appalachian Trail. Eau Claire Gorge. These are not ten-minute walks on a well-defined walking trail. This is actual ‘hiking’. He also said he enjoyed marathons with “an edge”. He had successfully completed the Boston Marathon — twice — and was now scoping out further opportunities to test himself.

Listening to him list off his bucket-list achievements of physical and mental endurance, I thought back fondly of my own participation in a marathon. Last week from my slouch-couch, I was an active participant in the viewing of a 90-minute documentary entitled ‘The Barkley Marathons’.

“A tiny town in Tennessee is the most unlikely of places you would expect to find the hardest trail race in the world. The Barkley Marathons only accepts 35 runners each year, via secret application process, and was created by cocky ultrarunner Lazarus Lake, as a mockery of a famously failed 1977 prison escape that lasted 54 hours. On this ever-changing and unmarked course, participants battle through treacherous terrain to find hidden books as proof of following the route. If they make it to the end, they will have climbed and descended twice the height of Mount Everest, in under 60 hours.

Brett Maune, a past finisher, has his sights on making history. John Fegyveresi, an unknown runner who winters in Antarctica, wants to outrun his past. One hopes to break a record, the other to just get back alive, and everyone gets lost. What follows is an oddly inspiring story where pain has value, failure is spectacular, and it only costs $1.60.” IMDB

I began the documentary quite late and was exhausted by the time it was done because it was about 2 a.m. I felt their pain as I had helped someone move a sofa earlier in the day. Other marathons I participated in: A thirty-hour sitting of back-to-back episodes of Twin Peaks. Then, in high school I also signed up for a 24-hour dancethon but grew bored after the third Flock of Seagulls song, so I left with a pal to drink Miller King Cans under a train bridge. I’m not sure if that really counts as successful completion. I also downloaded the full series of Mister Ed the Talking Horse. I hit the wall after the 64th hour but I pushed through and came away from that experience a changed person.