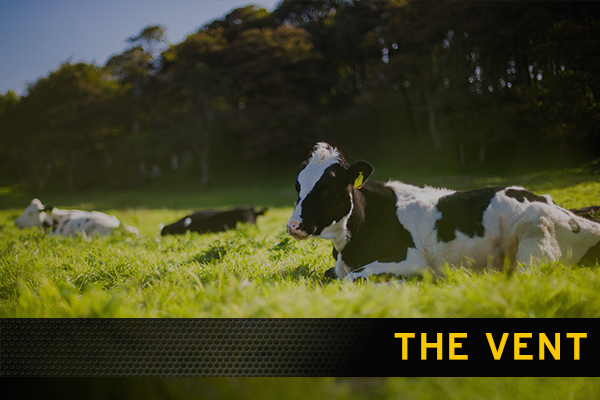 Yeah, so my grandfather used to take me with him when he’d walk through all the back fields of his farm. Hundreds and hundreds of acres. I used to enjoy these walks. My grandfather was always walking. At least once a day he’d go check in on his cattle if they were out grazing in one of the far fields. There were about 100 of them, most of them being lazy, unreasonable and irresponsible, and if my grandfather didn’t keep them in line they’d likely spend most of the day smoking hoof-rolled cigarettes, drinking moonshine and sleeping in the shade not making milk, which is why my grandfather housed these cows in the first place.

Around each neck hung a rusted cowbell on a thick leather belt. I remember that there would never be any distant cowbell ringing as we slowly walked into the clearing through a single-file cattle trail that weaved through fir trees. (*Full disclose: I don’t know what kind of trees these were but they had little green needles like a Christmas tree, so whatever kind of tree a Christmas tree is, that’s the kind of trees that the cattle trail scarred the earth through.) There would be birds chirping and the sound of us crunching over twigs and leaves, but no ringing of cowbells. Then we’d see the herd, all laying around smoking, drinking moonshine or sleeping while definitely not making milk, but when they caught site of my granddad they all started walking around, mooing, ringing and trying to look busy making milk.

They weren’t afraid of my grandfather. He liked his herd and the herd liked him. It was a mutual respect. He never hit them with sticks or anything, and he fed them really well. Sometimes he’d cook them fresh omelets, deep fried pickles and battered pickerel. Their barn had heifer hammocks and an old timey radio that picked up the local country and western radio station. As far as being a farm animal, life could have been much worse. They had six week maternity leaves after calving, and none of them ever had to worry about veterinary bills or income tax.

Once in a very special while, when the moon was right and the tide was high, he’d let out his bull named Maynard who would spend the next few nights wining and dining a select few of the ladies. My grandfather sprung for everything. He respected all his animals. Pigs. Chickens. Turkeys. He didn’t subscribe to the notion of any man having any dominion over animals in the slightest. His earthy philosophy centered on the fact that animals were not put on this planet to serve man, but since they were essential to man’s survival, it was never anything to be taken for granted and we had a duty to treat them with kindness and respect.

One day my Grandfather returned from his neighbour’s farm – like five miles away – with a massive shiner. His eyelid was swollen shut, and there was a short but severe split over his eyebrow. My grandmother was mortified, and immediately (yes, this is ironic) took a frozen steak from the freezer and made my grandfather sit in his favourite chair and hold the frozen meat over his eye to combat the swelling. It was exciting. She asked what kind of trouble he had gotten himself into “this time”. She always accused him of “getting himself into trouble”, which he never did. He was a gentle man with a work ethic that was unquestionable.

“That damned Ernie punched me,” he said.

“To show him how it felt to be punched.”

“Why on earth would you do that Angus?”

“We were talking about me buying his plow. Then he punched one of his milkers right on the snout after she stepped on his foot. So, I punched him, then he punched me and here I am. I sure told him what he could do with his darn plow.”

“Well, you just sit there for a while. I’ll get you a Porter.”

“No time. We have to go check in on the cows.” He tried to wink at me but he looked a little crazy winking with one eye while the other eye was locked down tight from the swelling. “Those cows don’t get anything done unless we stay on top of them, right boy?”

“That’s right grandad.” Then off we went sneaking up through the firs. As per, there were no distant ringing of any cowbells.