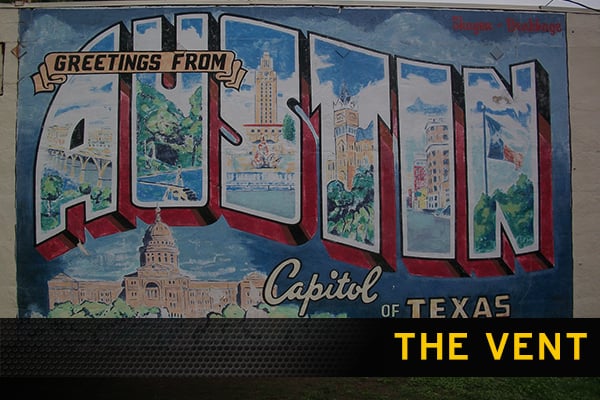 The adventures of Kevin and Texas Geoff

I’m off to Austin, Texas in a few days to see a WEEN show. I have a pal who lives out there who has earned a reputation as a top-tier graphic artist and animator in the world of video games. Chances are any big budget video game, no matter the platform, if you’ve played he, he’s worked on it in some top-secret capacity. This is my second trek to Austin. A few years back he took me to the Alamo and some tacos at Tacodeli. While we were gobbling tacos and drinking Lonestar on the outdoor bar patio, he told me that the last time he was at this taco hotspot which has become a local stomping ground for Mexican fare aficionados, he had been bitten by a tiny spider that had enough neurotoxins to kill six giants and 30 regular sized humans. He ended up in ER where he was given some type of antidote and a considerable bill.

Prior to this first visit, I hadn’t actually seen Texas Geoff in years as Austin is not really close to my little hamlet. It’s a little out of the way despite the fact that the world is shrinking by the second with the whole Global Village type thing going on. I mean, sure, Austin is technically a walkable destination from my front door, but I’d have to get up early and walk for nine years. Airfare has become a little more affordable and a little more time-efficient for treks. Plus, I’m not much of a walker. I’ve mastered sitting still for long periods of time, but walking? Not so much.

Driving the Interstate 35 intestate takes nerves of steel. Texas Geoff does not have nerves of steel. He’s a nervous cat who angers easily at the speed demons who drive like they’re on fire. The average speed is about 120 miles an hour. Lots of bumper stickers with charming sayings like “Stay Out of My Way or I’ll Shoot You in The Face with The Machine Gun I Just Bought at Walmart for Sixteen Dollars.” Yikes.

Like a gracious host, he arranged for us to do some touristy things. I had my photo taken with the bronze statue of Stevie Ray Vaughn and went to a bar where Janis Joplin used to sing before becoming The Lady Who Sang the Blues. We went to a Drive-Thru Safari Park where we drove slowly through the park eyeballing the big-ticket A-List animals. We were warned upon admission not to exit our vehicle at any time for any reason. It was 104 degrees Fahrenheit so even if we wanted to get out of the truck and tease a few rhinos, it just would have been too damn hot. Regardless, we did drive past a young dude relieving himself under a tree by a peacock. Texas Geoff called him a “dumbass” and took a photo of him with his phone. That was the only photo either of us took, oddly enough. So, we drove slowly, talked, listened to music stopping once in a while to toss popcorn at yaks or to wait for a buffalo to finish defecating in front of us. This buffalo was in no hurry. It’s not like the buffalo had anywhere he needed to be, like some type of Skype meeting or a meeting with a financial advisor. The car behind us kept beeping at us to get moving. Texas Geoff resisted the urge to jam the truck into ‘R’ and ram the car. It seems Texas is taking its toll on Texas Geoff. Poor bastard. His nerves are shot. After the buffalo finished his business he walked casually up to my window and just kind of stared at me. I felt like an animal in the zoo. It was degrading. The buffalo stuck his tongue out at me, made funny faces at me while tapping on my window. It agitated me and made me snort.

For this trip, I’m taking my 21 year old son ‘Lurch’ who is a big WEEN fan and a massive video gamer. He knows all the projects Texas Geoff has worked on over the years and is pumped to talk ‘shop’. Other than the concert, there is little on the actual agenda. A tattoo possibly. Back to Tacodeli with eyes peeled for spiders. I’d like to go back to that Safari place and see how that buffalo is making out and just play a little catch up with him. Lots has happened in Austin since my last visit – the biggest being the relatively recent US Presidential Election which is a little polarizing so if we do go back to the Safari Park, we will not bring up politics to any of the animals. The yaks are on edge, from what I hear.