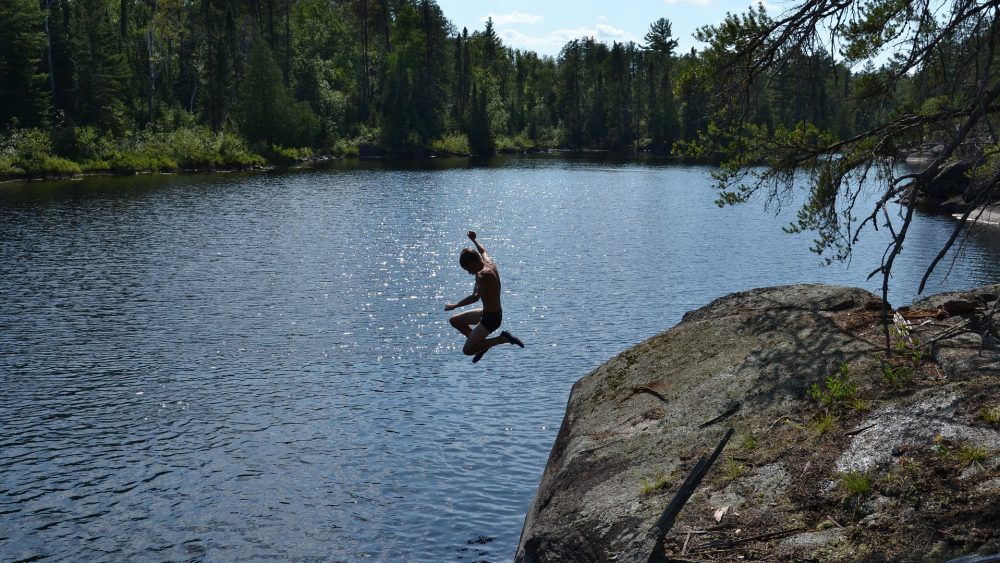 In high school there was a place where we’d go to swim and cliff jump. It was a bit of work to get there. You had to trespass, hiking a mile or so off the highway hauling whatever you needed for the day or for an overnight bush party. A trip to the ‘Chutes’ was at least a full day’s commitment, but you were rewarded for your efforts by staking claim to a secluded place where you could just hang out and do teenage stuff without your mom spotting you while driving around in the family station wagon, and then pulling you in by your ears without even slowing down.

Naturally different teens were into different things, but it was the cliffs that brought everyone together. The Chutes, on a busy day, was a collective adolescent angst, anxiety, hormonal eruptions, boundary testing and such.

The height of the cliff plunge varied according to individual bravado and moxy. From ten feet to about 50 feet (and higher). The water was deeper than Mariana’s Trench. Not the band. The trench. Your coolness was measured by the ledge you chose to jump from in order of ascension, as well as how cool you looked on the way down. Feet first was the norm, but diving head first got you high fives for sheer audacity and panache.

The coolest cats jumped feet first from the highest point with a reckless abandon. It was much too high to actually dive, but the sheer height scored you the admiration.  Shoes were required as your feet slammed into the water first. You needed to tuck in your arms tightly to your side. If they flew out and up on the way down and smacked the water from the underarm, it was apparently quite brutal. Or if your feet ended up over your head and you accidently smacked the water ass-first, you would create a sonic boom that could be heard for miles.

There was a lot of pressure to climb a little higher and jump out a little farther. I did neither. I tried once and stood on the lowest ledge and looked down. “Jump!” That’s what they said. Over and over. I had no interest in jumping. I didn’t even care much for swimming. On the ledge, I looked up at the kids on the higher ledges plummeting down like rockets. I just stood there. After about half an hour I just got bored of the fear and anxiety and jumped out feet-first. Splash. Cold water. What a let down. Zero adrenaline. When I broke the surface no one applauded or even noticed that I jumped. They’d given up on me after about 30 seconds. The window to impress is a small one when you’re a kid being pressured into something.

“What?”
“Try the snapper. You’ll love it.”
“What the hell is a snapper?”
“Fish.”
“That’s a helluva name for a fish. I think I’ll pass on the snapper.”
“This place has the best snapper sushi in town.”
“I don’t care really. I don’t want snapper. I’m just gonna get some egg rolls.”
“Who comes to a sushi place and just get’s egg rolls and no snapper?”
“The same person who said he didn’t want to go to a sushi joint in the first place.”
“You’ll change your mind when you have the snapper.”
It was a sushi snapper standoff. Ignoring me, he ordered a variety of sushi, including two snappers from a little checklist type menu. It came shortly after. He ate his and put one on a little plate and pushed it towards me.

“This is heaven. Try it.”
Here I was — a 48 year old dude being bullied into trying snapper for the first time in his life.
“Does it taste like fish?”
“It is fish. It’s a snapper.”
“I hate fish.”
“No one hates fish. Especially snappers.”
“You’re not listening to me. Why is it important that I eat snapper? How is it that you can spend this type of energy trying to convince someone to eat snapper when they clearly want no part of it.”
He popped his snapper sushi into his mouth. “See?”
“See what?”
“Not a big deal.”
“Not eating snapper is even less of a deal.”
“Just eat the snapper.”

I sighed. I got bored of listening to him. I looked at the thing. I don’t know what part of the snapper it was but it was placed on a little blob of sticky rice. I forked the whole thing and popped it into my mouth and knew right away that it was terrible so I just kind of brought up my napkin to my mouth and let the snapper and rice blob fall into it.

“Well?” he asked. “What did I tell ya! It’s great, right? Now you can tell people you ate snapper sushi.”
“I’m not telling anyone about this.”