The Legends of the Fall 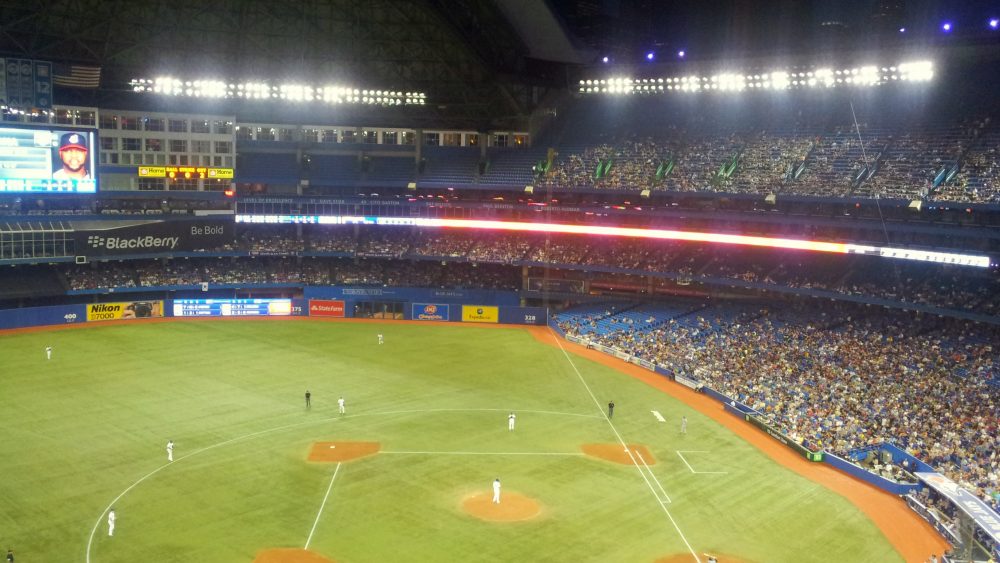 The Legends of the Fall

I was only ever at a professional baseball game once during my whole entire 47-year existence. In Toronto.  It was about ten years ago, give or take a few days. We were smashed up high in the cheap seats, which were not cheap at all unless you are a jet-setting socialite, in which case you would not jet into Toronto to haul ass by limo to the Sky Dome’s (now Roger’s Centre) VIP passenger drop off only to amble up one hundred flights to get to your tiny seat, where you could literally stand up and touch the ceiling of the dome. But I didn’t care. The guy I was with sprung for everything which was part of the pitch when he invited me. He bought me a huge foam finger if I promised not to annoy him. Free ticket. Free grub. I felt like the Pope. He usually goes to all Jays home games with his buddy Lawrence. For this game however, Lawrence had to back out at the last minute lamenting that he was quarantined in hospital in some type of tent while being treated with an aggressive regimen of I.V. antibiotics for what was suspected to be necrotising fasciitis (yeah, that’s the flesh eating disease – no bull.  A lot of people get it without it becoming the stuff that nightmares are made of). So, I was offered Lawrence’s ticket since my host didn’t want to go alone and I happened to be in the right place at the right time, I guess. Serendipity can run hot and cold.

Typically I don’t follow sports. This may have been established before in previous columns; I don’t remember but it’s worth mentioning again: I don’t follow sports. I’ve tuned into major events in sports history but have never made any concerted effort to support any sport, team, athlete, country etc. I’ve been to football games, hockey games and baseball. I’ve also been to some amazing small-town wrestling bouts. Recently my band played at an outdoor dodge ball tournament. Dodge ball is a sport. I think.  A cobbled Main street was sectioned off into a number of cages so men and women of all shapes and sizes could wail big red rubber balls at one another. If someone was struck in the face people cheered. I know there were rules, but they seemed to be of little importance. Any sport where someone is intentionally hit in the face at close range with a big read rubber ball is pretty interesting in my experience.  Errant balls sailed over the cages. It’s a cool band gig when you are forced to duck from rubber projectiles while playing music.

Back to the Jays game. It was against Texas. Where I was sitting, there was a rowdy contingent of Texas fans. They were a tight-knit group comprised of about dozen or so. Strength in numbers. They got boozed up and rowdy; their jocular shenanigans of which I found to be more interesting than whatever was going down on sea level. The Toronto fans surrounding this sovereign nation of Texas fans were boozed up.  What turned into good natured needling and heckling between allegiances devolved by the seventh inning at which time people were encouraged to stretch – and stretch they did: punching and kicking away at out at each other. It was mayhem. The game then continued, and just when things in the stands would settle, some flashpoint would ignite more fan weirdness. People would, lob, toss, chuck, pitch, whip, or Frisbee-throw whatever was handy down onto the field. Both sides. It rained objects. I knew it was time to leave when a Jay’s back catcher tagged a Ranger dude out at home in cloud of dust and twisted extremities. The Jays cheered and threw crap down on the field in delight. The Texas fans in my area booed the call and threw an 1,800 pound Long Horn cow down onto the field crushing a bat boy.  I had no idea who actually brought a longhorn to the game, but they must have had the premeditated intention of tossing it down onto the infield at some point. It sure made a statement. This was not an impulsive act. The guy that brought me to the game was disgusted by such a classless act. I know this because he threw a hot dog at the Texas dude who threw the 1,800 pound cow. So the eighth inning was interrupted for about twenty minutes while the field crew swept the litter and the cow off the field. The bat boy was shaken but not stirred. He received a standing ovation when he proved that he could stand under his own power without any assistance.  The long horn was fine as well. He was lassoed and adopted by the Ranger’s  3rd baseman.  Happy endings all around. Is there a moral to this story? I may have started out with good intentions, but now I have no idea. Is it ever good to toss something onto a playing field? I don’t know. A guy in Toronto did, and his life will never be the same which seems as preposterous as the notion of someone tossing a Texas long horn down onto left field.