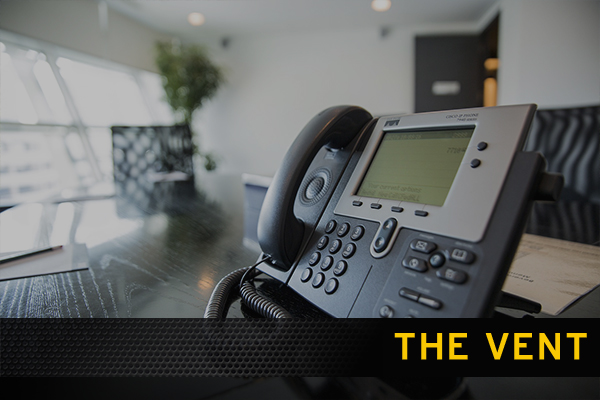 The Call That Came In From The Cold

I don’t do well on the phone. I have a hard time explaining myself when I’m speaking face to face with people, but I get by. On the phone, I am utterly useless. This becomes a little tricky at work. I use mostly email or messaging platforms to correspond, and face-to-face interactions in the office. I make the most of language and concise use of words. I stay away from emojis like there are germs, as I have no idea what most of them are intended to emote. It’s wrought with trouble. I’m good at interpreting inflections and body language. Face to face is the way to go for me. When not possible, please email, when not possible, Skype messaging. The absolute last resort is calling.

We have a voicemail system that takes the caller on a magical ride through the typical labyrinth of choices. I have an extension assigned to my phone. When it rings I look at the call-display. If the call has been syphoned finally to my extension it means that someone who is not aware of my aversion to the phone wants to speak with me, calling up cold. (Cold calling must be terrible for the soul.) Naturally, I’ll answer as it part of my job. The majority of the time the call has to do with some aspect of my position as Marketing Coordinator. A publication is typically looking to sell advertising space in their magazine. I’ll then ask them to email me all the specifics, like the rate card and digital media kit so I can eyeball all the specifications, and I’ll reply by email as to what I’d like to do with the opportunity. Most people will accept this and follow through via email. Sometimes, however, I will ask them to email, and they will dig in with the hard sell over the phone. I’ll ask them again to email me. If they continue with the pitch I will tell them I seldom do any business on the phone due to a 70% hearing loss in my phone ear. This works most of the time, but there are some that will immediately apologize before continuing with the sales pitch, but shouting now. I will say that shouting doesn’t really help, it just garbles everything they are trying to convey. If they continue I’ll just keep saying “pardon?” and they’ll repeat whatever it was but about 10 decibels louder. Now this becomes entertainment for me. It breaks up the monotony of a 9-5 gig. I dig my job, but it can become monotonous like 99.9% of the jobs out there.

I recently received a phone call from a guy in the UK who wanted to speak about the possibility of advertising in one of their mining trade magazines. I asked him to email and went through my whole spiel about 70% hearing loss at which point he apologized and began shouting. He caught me at a time when I needed some type of work break so I began to pepper him with questions. I would keep up with the ‘pardons’ since he didn’t want to adhere to my no-phone request, I turned it around. This is the intel I was able to gather:

He lives in Kingston upon Thames, just south of London, England. At that moment it was cold and rainy. “Dreadful”. He’s 36 with a girlfriend who has a rich uncle — “quite wealthy indeed” he repeated in his wonderful English accent. He said that her uncle has a summer home that they go to “quite often” as there is a granite indoor heated pool and marble everywhere. He fears that if his girlfriend breaks up with him he will lose access to the beach house. We talked about BBC radio and Peaky Blinders, and how he binge watched all episodes on Netflix UK. He hates the East Enders and may be on only chap in England who does not care much for the Beatles, but does enjoy some Black Sabbath. He attended the University of Chichester with a BA in filmmaking which didn’t really “pan out” which was a nice pun. We laughed. All of this was infinitely interesting to me, although I was still obligated to interject with the odd ‘pardon’.

After about 30 minutes of solid human interaction with a nice British chap from across the pond, I had to shut it down. I had work to do. About five minutes later I received an email from him as requested. I don’t know if I’ll be doing business with his company, but it was nice meeting him. The opportunities for true human connections are rare now. It feels like a now know a guy who would let me crash on his sofa in his flat if I ever found myself in London. That’s cool.

Okay, now, for those out there thinking I am a monster for feigning a partial hearing impairment to avoid telephonic interactions, before you rise up en mass, I do have a legitimate hearing impairment in both ears from playing live music for years. It’s not 70% but enough for me to get me out of most phone interactions.