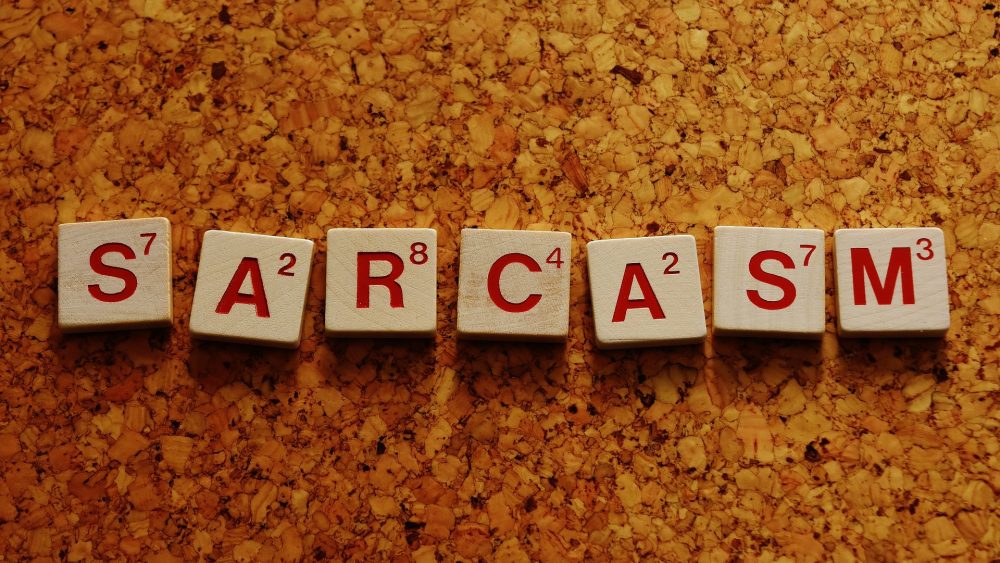 The Subtle Art of Sarcasm Lost in the New Millennium

“Ya figure? Duh. Boy, you really think so? It’s a good thing you told me because I couldn’t have done it without you.”

“Ah, hang on. Are you being sarcastic? You are, right?”

Sarcasm is “a sharp, bitter, or cutting expression or remark; a bitter gibe or taunt. Sarcasm may employ ambivalence, although sarcasm is not necessarily ironic. The distinctive quality of sarcasm is present in the spoken word and manifested chiefly by vocal inflection.” – Wikipedia. Duh!

I’ve cut down on my use of interpersonal sarcasm due mostly to the fact that I have cut down on my interpersonal relationships. I’m either at work or at home – neither environments are conducive to sarcasm nor warranted. I have great working relationships with funny people, and a strange, happy home life. Ironically, I reserve the right to lay down sarcasm with close friends – relying heavy on the humourous aspect of sarcasm, removing the element of contempt taking the mean sting out of the jab.

Much Ado About Nothing

Now, admittedly, I have many issues. I’m neurotic. That’s one of them. I wasn’t born neurotic. There are no neurotic newborns, I don’t think. If there are any neurotic newborns reading this, jeez, I’m sorry. I didn’t mean to, well, uh, just, uh, sorry. My neuroses are rooted in my deep seeded fear of saying something wrong to the wrong person at the wrong time in the wrong social situation and consequently taken in the wrong context. This hang up can prove quite paralyzing at times as I don’t seem to have much of a filter that prevents me from just ‘talking out of my ass’ which has lent itself to a heavy reliance on the written word. In this controlled environment, I seldom write ‘off the cuff’ remarks that can be misconstrued. No ambivalence. In this realm, I am the sole, true master of my environment. I try to make optimum use of context to provide a clear picture of what I am trying to say.  People ride me for writing 500 word emails. I ride them for writing 4 word emails that leave nothing but a massive hole ripe for misinterpretation. Being neurotic is difficult in this regard. Did I piss them off somehow? What do they mean by bolding that word? AND WHY ALL WORDS UPPERCASE?? Are they being sarcastic? If they are, I should be sarcastic back unless they are not being sarcastic but sees that I am being sarcastic. It’s exhausting. I don’t usually expend this much energy in casual interactions as I have a creed that I try to live by: “Don’t be a jerk. Don’t hang out with jerks.” This social code has treated me well so I haven’t had any reason to use my words as weapons.  Well, not many anyway.

“If you know the enemy and know yourself, you need not fear the result of a hundred battles.”
– Sun Tzu

I don’t handle pointed sarcasm very well. I see it as a form of low-class bullying. If I sense that someone has taken a sarcastic pot shot at me from a safe distance, my tendency is to retaliate with a carpet-bombing campaign of sharp pokes. Death by a thousand verbal needles. Immature? Yup. This defensive mechanism is part of my neurotic DNA. Interestingly, I come from a long line of neurotics. If you climb high enough up my family tree, you’ll find that I am related to King Henry VIII of England. Although we never actually met, I’m thinking he was a little neurotic. Damn that Tudor Monarch. Thank you Ancestry.com.

“I am not proactively sarcastic but reactionary.”
— KJP III

You know what’s cool? Quoting yourself in digital print. It makes you instantly notable. Okay, I was in a social situation recently; a wonky social circle that was more of a decahedron than anything. There were a few very casual acquaintances, and one friend (which is why I was there). The group was talking about something I knew nothing about: sports. No problem. To try and seem engaged and less aloof, I asked a question. I thought it was a legitimate question asked by someone who simply did not know the answer. Me. There are no dumb questions, remember? The dude that replied was the self-appointed clichéd alpha male; the apex predator. His sarcastic reply showed zero class and even less creativity. It was a cheap shot that fell way short, coming across as mean-spirited, show-boaty, totally unnecessary and just kinda dumb. I looked at my pal who knew this dude better than I did. He recognized that I was seeking his blessing in my opening of the bomb bay doors. He smirked. It was ‘go’ time. And go I did. Immature? Hell yeah.

For many, there are those myriad moments of regret: “I should have said . . .” while for me, there are many moments of: “Man, I shouldn’t have said that.”

Now we freely use emojis as shortcuts to conveying human emotions, reactions or specific sentiments. The subtle art of interpersonal sarcasm has been reduced to weird symbols. I often need to confirm friendly sarcasm dispatched by friends. “What does a big slice of watermelon mean?” “Is this a reply?” “Does an 8 Ball mean sarcasm?” Mostly when I need to ask if someone is being virtually sarcastic with me, they respond with: “YES. DUH” with a little yellow face with eyes that appear to be rolling.