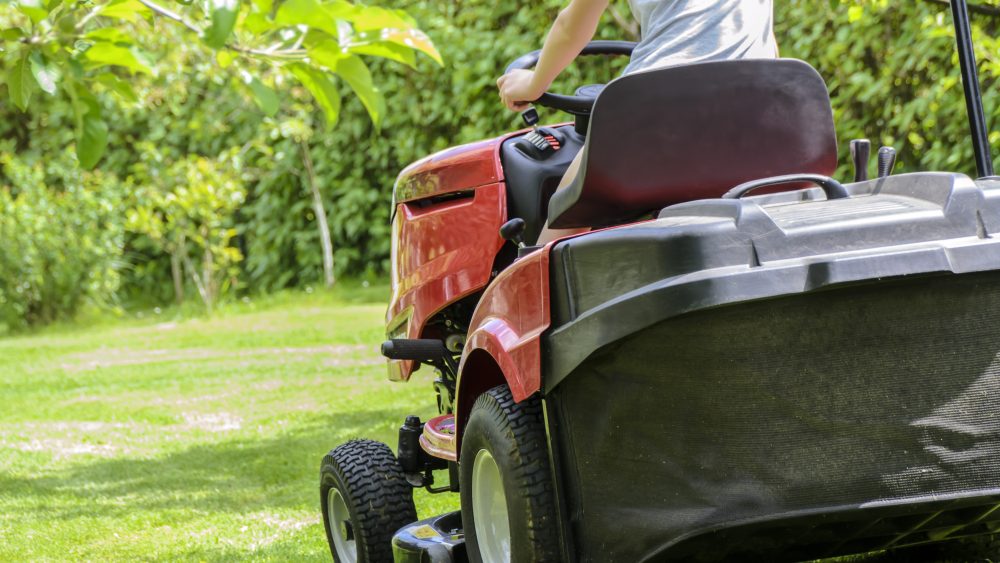 I have a six minute commute from my home to my workplace. I’m not sure if this counts as an actual commute or more of a ‘short spin’. Although I can probably make this trip with my eyes closed, I choose not to as it would be reckless. I instinctually know where every pothole is and every slow bend in the road. I see many of the same vehicles passing me in the morning and again at the end of the working day. I see many of the same kids waiting for the school bus and then getting off the school bus. They seem happier getting off than getting on. Point of this seemingly rambling preamble? The point is that it’s often easier to notice those routine things when they are a just little out of place.

During one homeward bound spin, I passed the bricked bungalow with the massive impeccably manicured lawn. Every day I take note of the lush colour and the comforting pattern the homeowner makes with his riding lawnmower. On this day I saw him with a sunhat on sitting on his red riding mower. It was parked at a weird angle towards the corner of the lone running adjacent to the highway. The old man was just sitting on it kind of looking around. I’ve seen him on this mower many times. Usually in motion. The guy loves his lawn. I drove passed but felt compelled to glance in my rear view mirror. Something seemed off. It was just a sense. I slowed and turned around. The mower was pointing down close to a bit of a decline. It had rained the night before. One of these Noah’s Ark type rains but it was only for about forty minutes as opposed to forty days. He might be stuck.

I pulled off onto the gravelled shoulder in front of his house. He remained seated. I ambled down the grassy grade. He waved me over. He was old. There is nothing wrong with using ‘old’ as an adjective. There is nothing wrong with being old so how could it be wrong to describe someone as old? He was old. I asked if he was stuck and he said in very broken English that the battery was dead. Fear struck me. I would have to help him boost it. Some people have an irrational fear or spiders or heights or camels. I have an irrational fear of using jumper cables. I have it in my head that if done incorrectly, both the boostee and the booster will immediately blow up. It was when he asked me to lift the little hood on the mower did I notice that he had a leg brace and was wearing some type of harness around his waist. His wife then came out. Her English was much better than my French. She explained that he had suffered a stroke which left him with very limited mobility and speech, but that would never stop him from mowing his lawn. The harness around his waist was for other to assist him in walking from Point A to Point B – in this case from the house to his mower.  I offered to help him back into the home so someone could come and deal with the mower, but he simply said: “Positive to positive.”

“He wants to boost it,” she said.  She walked back to the house and returned a moment later behind the wheel of a massive truck – one of these F150 things that he had purchased before his stroke. She edged it up to the mower and popped the hood. Even on tip toes I couldn’t see the engine. She brought out the jumper cables and handed them to me. I froze. Again, to reiterate, if not done correctly, I would surely be responsible for the sixty foot crater in this man’s beautiful lawn.

“Positive to positive,” I heard him say quietly. He reached out and took the cables from me, still sitting on the mower. He leaned up and over just enough to clamp positive to positive and negative to negative on the tiny dead battery posts before tossed the loose ends down onto the ground and motioning for help.

“He wants us to help him boost from the truck,” she said.

Together, his wife and I lifted him off the mower using the loops and handles from the system of loops and handles attached to his waist. I had no idea how he was going to find the truck’s battery let alone clamp down “positive to positive”. The truck was on a bit of an upgrade so it seemed access to the engine with scaffolding would be impossible. I pegged the elevation to be roughly 16,000 feet. There were clouds actually up under the open hood, but he kept repeating “positive to positive” which did not reassure me at all.  We hoisted him up and blindly he reached down like a mad surgeon, each hand gripping a sparking booster cable. I waited to be sent airborne. I heard sparks. He smiled and said “positive to positive”. We helped him back onto the mower where he elected to remain standing on the large metal frame that covers the blades.  I’ve never used a riding mower before so I didn’t know if the blades would start up right away, if indeed the motor started. She assured me it wouldn’t and before I could take any type of solace, he turned the ignition and the mower roared. He smiled and said: “Positive to positive” before settling himself down, adjusting his straw hat and driving away with the blades down.

Brilliant. The out-of-the ordinary-experience left me thinking about the importance of personal tenacity, independence, and keeping the positive to the positive.