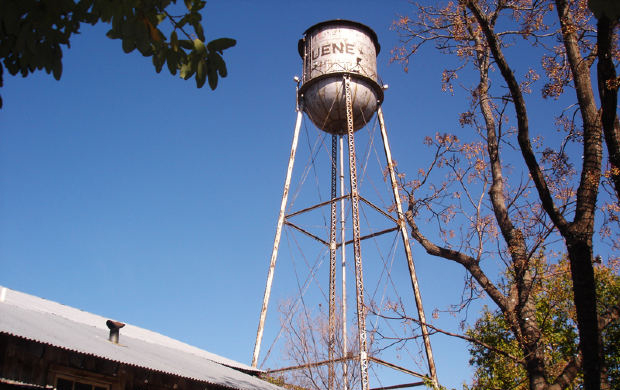 In my small town there is still the large water tower — a decommissioned relic from the Weyerhaeuser Timber Mill that was operational up into the mid seventies. The mill employed just about everyone at one time or the other. As a kid my house was filled with Weyerhaeuser Zippo safety lighters and Weyerhaeuser beer mugs. Today, the water tower still looms large as a familiar sentry adjacent to the rail road tracks. Train traffic has slowed over the years, but you know you’re in a small town when you see the conductor stop (park?) his train, stride across the highway to grab a large to-go coffee from Tim Hortons, cross the highway and hop back up and into his sweet ride.  You just know he’s wishing for a Timmys Rail-Thru so he wouldn’t have to take the half hour needed to bring his train (trailing a ten-mile long length of cars) to a complete halt.

The green Weyerhaeuser logo on the water tower has long ago faded, replaced by rust and graffiti. One day-glo orange message is an accusation calling out a resident by name for allegedly selling crack. Either that or it is an ill-conceived advertisement, cheaper than a billboard. As a kid I climbed the tower on a bet. I was afforded a panoramic view of the town. It looked pretty big to a ten-year old.

The population of my small town ebbs and flows, but typically averages about 2000 people. The town’s POPULATION sign has not changed since the eighties. The sign coming in from the east says POP 2000, as does the sign coming in from the west. POP 2000. It only makes sense that both signs use the same figure. 2000. Right on the nose. I think maybe that this type old New World settlement counts more as a village than anything. Towns are a little bigger. I’m about 45 minutes from a city, which is barely a city, but has a population of around 60,000 people. POP 60,000. On the nose.

THIS WILL JUST TAKE A MINUTE

A few weeks ago I was driving a few hours south from my small town to a ‘true proper city’ with an instantly recognizable skyline and a population of 6,054,191 (as of last census taken back in 2011). I think this city has a crappy hockey team though. I’m not sure. I don’t know anything about sports. As traffic began to congest and bottleneck, my passenger had asked that we make a quick dip into a Shopping Center about 20 minutes before our actual destination. It was to take “only a few minutes,” but I know that gone are the days when you can simply pop in and out of any retail store housed in a mall

This was not a mall, as such, but more of a bustling metropolis housed under one roof with all sorts of banners and ads hanging from the ceiling. This place was and is a true global village housing countless micro-economies employing hundreds and hundreds of hard-working folks. The transient population easily trumping my town’s.  There were computer kiosks that told me exactly where I was in the capitalist city. City planners had sectioned off the mall into ‘neighbourhoods’ to give the whole place a sense of community as opposed to that truer sense of chaos and anarchy.

In my small town we have high speed internet and all the top parcel / courier services. Since I did admire the Doc Martens, I visited the website, and it took me less than 2 minutes to order a pair. They came 2 days later. I’m never in much of a rush.