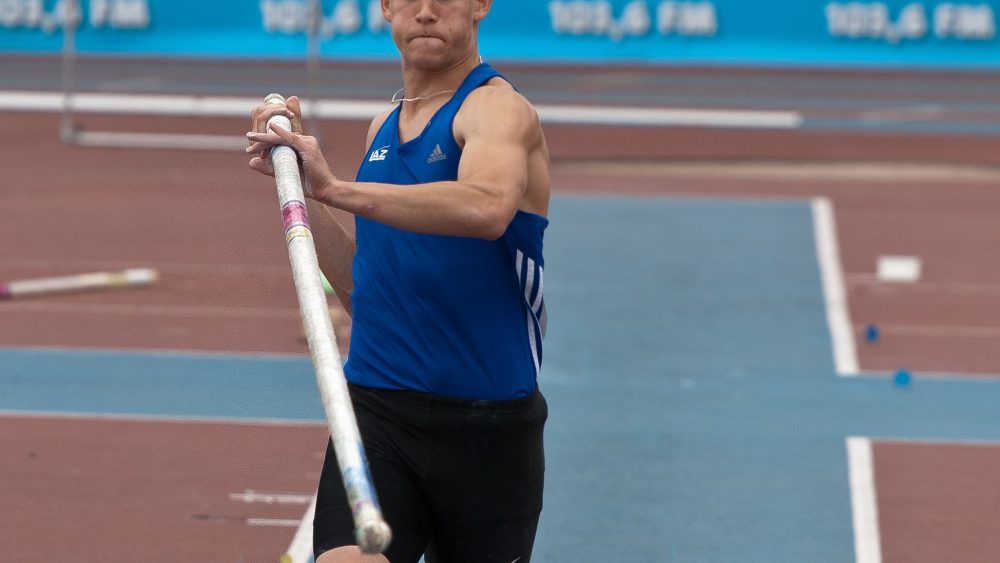 *Caution: This Vent has nothing at all to do with anything other than a heavy conscience.

Okay. Hello. So let us begin then: There was a time when I was a very successful pole vaulter. It’s no secret. I was a legend both locally, and eventually, globally. When I began my meteoric vaulting career in Grade 9, I was obviously just a punk kid who picked up the sport as a lark for Phys Ed. I had really wanted to chuck a javelin, but there was only three of those suckers, and one of them was, and still is, firmly embedded into the north wall of the house across from our track and field. So, I chose pole vaulting which proved providential as there was only one pole and I was the only one willing to give such a dangerous sport a reckless whirl.  Any sport that stems from the days of ancient Roman gladiators is suspect at best. Those guys were up for anything!!

Every year throughout high school I would place 1st then be bussed off to compete at all the neighbouring high schools where I would place 1st (and not just by centimeters and half inches, but by feet! The margins were massive). All my victories were after first attempts. Any more that one ‘go’ was strictly for suckers. I was a zit-faced celebrity on the amateur pole vaulting circuit. I was scouted by a guy with a pot belly and a shimmering green minivan. He was the Head of Athletics for a Big-City University. He offered me a full academic and athletic scholarship if I would enroll at his school and be part of his pole vaulting team. It was all a little sketchy, but this was years before it was to become blatantly illegal to offer potential students cash incentives and lavish gifts like cars, houses, live polar bears or live polar bears in a new house — all just to sign on a few dotted lines.

When I told my parents that I could go to ‘University’ for free, my bags were packed three weeks before my actual Grade 13 graduation. They were excited at the prospect at not having to pay any money for me to actually get out of the house (as they were fully prepared to pay handsomely) but my talent for vaulting was my gift to both my family and to the world.

The years collected as did my victories on the track. Usually pole vaulting is one of three events an athlete must complete in track and field, but since I was just too good at it I was never pushed into the other two events. (Long jump? C’mon. Gimme a break.) I kept winning and winning, smashing records. My last vault in the summer of 2006 was 138 feet! But I was harboring a secret. A deep secret. I was a fraud. I was cheating. I had to cheat, otherwise there was no way I’d be able to vault over a sofa let alone a bar propped 138 feet off the ground.

How Low Can One Go to Vault So High?

My despicable deception dated way back to the jubilation of that first successful vault. I didn’t cheat on that one, but I was intoxicated with the feeling of being praised. But the euphoria was fleeting. The second time I tried, no one was around and I face-planted. I picked myself up and had another go. I ran like the wind and missed the whole part where I was supposed to dig the pole into the box (‘A trapezoidal indentation in the ground with a metal or fibreglass covering at the end of the runway in which vaulters “plant” their pole – Wayne Wikipedia) and launch skyward. This would not do.
There had been rumors for years that I was cheating. My whole career was dogged by whispers and innuendo. No one was sure how I was cheating, but they were convinced that I was using performance enhancing drugs even though all drug tests returned clean. I would take every opportunity to dismiss it all as “professional jealousy” and “malicious attacks” to malign my stellar reputation as a Pole Vaulting God. I took to actually calling myself Icarus (forgetting how it all ended pretty bad for him).

It was in Belgium when the balloon burst. I know you have all read about it. I was sent home in disgrace after my cheating ways were exposed. Actually, there was only one way I cheated, but it worked really well for me for years. It made me a lot of money and allowed me to travel the world, get a free education and set myself up financially for life. So, remember way back when I was a kid and I wiped out twice? (If not, I think it’s a few paragraphs up from here.) Well, I was crushed, and feared that my one and first successful attempt to vault was nothing more than a fluke. So, that night I went into my dad’s garage where a massive dump truck was 75% dismantled. I spotted an industrial suspension spring. A light in my head went on. I called a friend who was a wizard at mechanics. I told him what I needed and in less time for me to actually think of the ramifications if such an half-baked, ill-conceived scheme, he had welded it to the bottom of a long aluminum pole. We signed a blood oath after I cut my hand on a piece of metal – it was to symbolize the clandestine meeting.  This was the pole that would vault me to fame. And the rest? It’s history.

So, what is the moral of this immorality tale? Is it to use a smaller spring so people can’t notice it if you intend on welding it to the bottom of a vaulting pole? Or is it the fact that cheaters never win, and victory earned is sweeter than a victory stolen? I have no idea. Full disclosure: Sometimes inspiration results in high art i.e. War and Peace, while sometimes the lack of inspiration results in nothing more inspired than an weirdly uninspired saga about pole vaulting, welding, a front end suspension spring from a dump truck, blood oaths and a life of secrets.