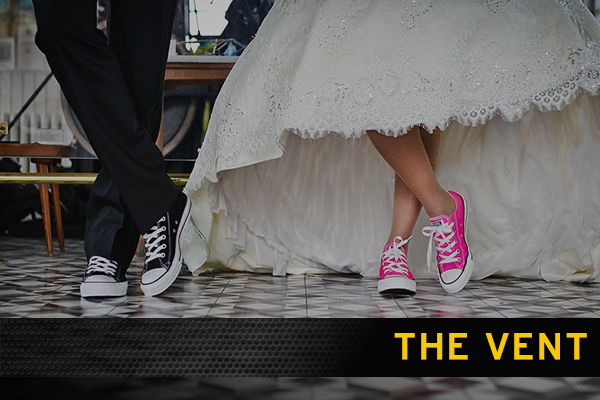 I now pronounce you Zappa and wife

As one half of an acoustic / semi-electric musical duo, I’ve played countless wedding services. These are not to be confused with full-on wedding gigs, i.e. the sorts responsible for getting uncle Ray to Chicken Dance. These micro–gigs are typically a low-key ambient type of performance. We’ll find a quiet corner and play prior to, during and after the actual ceremony. The bride will have a few songs picked out and we’ll get in, do our thing and get out usually unscathed. This summer there seemed to be a trend in wedding gigs – movie scores or theme songs. A few weeks ago, I performed a solo instrumental of the Jurassic Park theme on a steel guitar. Next weekend I’ve been hired to arrange the theme for Game of Thrones for solo guitar. I don’t mind. I’ll play anything really. It’s their day so who am I to say?

This past weekend we played an outdoor wedding in a public park on the grassy shores of the mighty Ottawa River. It’s always a gamble planning to play any outdoor ceremony as it is heavily contingent on the weather. Summer is hard enough to predict but when you get into October it really can go either way. The setup was cool. The seating consisted of about 100 hay bales arranged in concentric circles radiating out from the center of an arch. White cloths draped over each bale. It had a sacrificial Celtic feel to it for some reason.

The reception began at six pm. The day prior, it rained continually with temperatures well below normal after two weeks of unseasonably sweltering heat and humidity. The wedding day, however, was perfect. A big hard sun blasted down from an azure cloudless sky. All day. By the time the reception commenced, the sun softened and slowly sank in down into the east. Picture perfect.
SETUP & CUE #1

I had arrived by Jeep about an hour before the ceremony, to begin setting up a small amplification system. In meeting with the bride a few weeks earlier to discuss logistics, she assured me that electricity would be provided from a nearby outlet. I stepped out of my wheels and looked around. I spotted a mound of extension chords in a driveway across from the park. Hum. I crossed the street and checked out the tangled multi-coloured ball. It was not one chord but about nine miles of chords plugged into one another. I traced it back to a sketchy outlet in a distant carport. Hum. I untangled it and laid it down across the road up, snaking it right up to the picnic table where my mixer was to be powered. According to one of my power bars, there was no ground current as the green indicator was not green at all. Ominous. Hum. Okay. I set up anyway and did a quick sound check. I warned the singer to not actually make any contact with the microphone or risk certain death. On cue, we began our first song. It sounded beautiful until the loud HUMMMMMMMMMMMMMMMMMMMMM from the shady ad hoc wiring. We soldiered on because that’s what professionals do. The show must go on.

Our next cue would be in about ten minutes so I began eyeballing the extensions chords to see if I could tame the hum. Then, from a distance I could hear music. I thought to myself; “who the hell would be so rude as to not turn off their music from their home or yards while a public wedding is taking place within a stone’s throw?” The volume was not overpowering, but it was intrusive in a subtle way. I looked around. I couldn’t determine the source of the music as there were no yards or lawns with any people standing around listening to music. Hum. Then I recognized the music. I recognized the singer. I recognized the guitar. I recognized the song. Oh man. Frank Zappa. The horror! It all became quite clear. As I set up alone before any of arrivals I had been playing Frank Zappa’s ‘Bongu Fury’ CD featuring the combined vocal stylings of Captain Beefheart and Frank Zappa. I had to act fast so I slowly backed my way inch by inch to my Jeep. I knew that by opening the door the true volume would pour out, so I waited for one song to die out and the volume drop, but it was a live taped show so there were screams and howls in between each selection. But I waited. Then I listened for the best moment to open the door, turn off the stereo and get back into position. I pulled it off. I’m a professional after all. I got back just on cue for second selection which required me using a capo to transpose the music to match the preferred vocal key for my partner. I picked up the guitar and looked for the capo. It was on the picnic table. I reached for it and managed to drop it. It took a weird bounce tumbling around the grass coming to a weird stop under the picnic table. No worries. I’m a pro. I managed without out it. Cue #3 would come when the happy newly weds were to leave the inner circle. The third selection. That one went off without a hitch so did the extension chords as it was caught up in a passing vehicle and dragged down the street. Hot damn. It was just one in a long line of memorable performances. Ninety percent of all gigs go off without a problem. I tend to forget about those. It’s those that trip around in that ten percent that are infinitely more interesting.