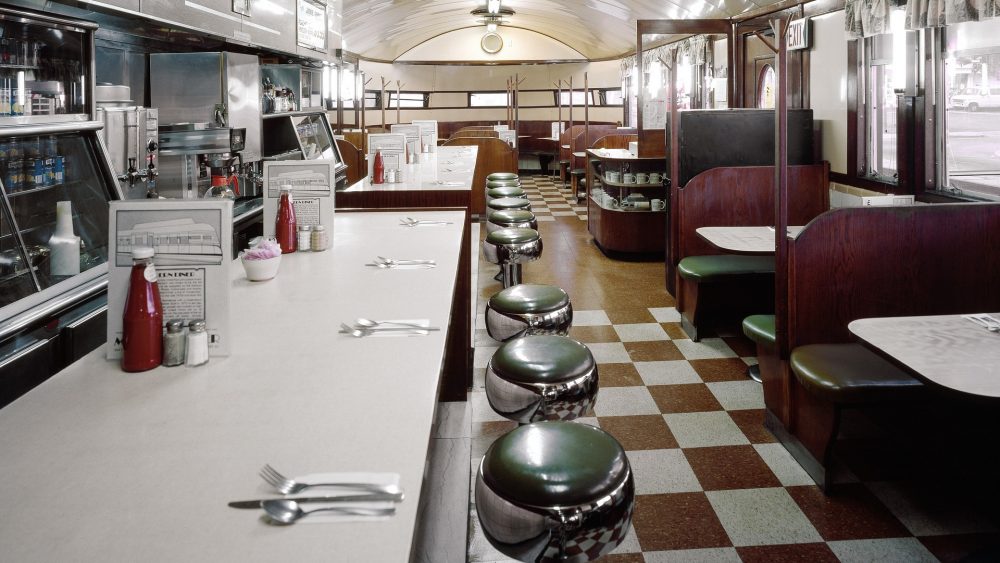 Nothing Can be Finer than Eating in Your Diner

I’ll often say to whoever is still listening to me at 11 pm: “Damn, it’s a good thing we don’t have a Kentucky Fried Chicken in this town.” My family usually starts slowly tuning me out by 9 pm.

I’m not a three-meals a day eater. No breakfast and usually no lunch. I put off eating. I’m a procrastineator (get it?). I’m also an impulse eater. It’s one of my many flaws. I can go a long time on caffeine, and eat whatever is handy to just keep on rolling. Yeah, it’s not healthy at all but I usually have no appetite until about 3 pm and at 3 pm who has time to eat?

My town has a Tim Hortons that still smells new. It’s our only bona fide franchise, and the only place that stays open 24 hours, but they don’t serve fried chicken or Chinese food. This is a good thing.

Although they are shrinking in numbers and slowly sinking into the bubbling tar pits, my quaint northern hamlet still has a few small diners that are family run. Small diners. Big families. Great grub. Always. Great coffee. Great staff. Great owners. Always. Up until the late 80s all our restaurants were open all day, everyday, and all night, every night all year. They were all Mom & Pops, usually owned by a friend’s mom & / or pop. There was a place called Donny the Greek’s that didn’t serve Greek food. Great bacon cheese burgers, but I don’t think that is considered traditional Greek cuisine. I don’t even think Donny the Greek was Greek at all. I asked my dad when I was a kid why people called him ‘Donny the Greek’ and all he said was ‘mob.’ I had no idea what that meant. Of course, Donny the Greek was not in the Costa Nostra, which is more of an stereotypical Italian thing, if you were to believe Hollywood. Donny the Greek moved his family to town from Alberta in the 70s. Alberta is nothing like Greece. Or Italy. No one to this day knows why the called him Donny the Greek.

Keeping in mind that I am not 100 years old, I do tend to speak in terms of ‘back in the day.’ So, back in the day (mid 80s), each weekend, after the town’s three taverns would shutter their joints at 2 am, the masses would disperse into the dark and then reappear under the street lights en route from their vacated bar stools to dining booths and spinning stool, stuffing into the diners and truck stops. One truck stop had tabletop jukeboxes. Cheap Trick from one booth would waft over Joe Cocker in the next booth who would growl over and drown out Rita Coolidge. Another place had a Wurlitzer. This was not the 50s. No one danced. People would just walk up to it, browse for a bit by flipping a handle to scroll through the selection of 45 rpm vinyl records, pop a coin in and choose 3 selections before walking back to their seat. If you chose a song that ‘sucked’ you heard about it before you had time to sit down. A nasty joke was to jam the thing full of coins and hit REPEAT over and over on a song of questionable musical merit before walking out the door.

There were no 15-minute seating limits. In high school, I’d spend many hours with friends at the Orient Family Restaurant. Every town has one. Exotic décor and faded laminated menus. Large potted bamboo plants. Coffee. Fries. Coke from a bottle. The bad-asses smoked cigarettes. Then more fries, and if someone wanted to be a big shot, a Dinner 1 A consisting of one egg roll, chicken fried rice, some Chow Mein and 3 chicken balls. (I never knew how they got three balls off one chicken.) Then someone would go back to the Wurlitzer and drop in a few more coins. Aldo Nova. Foreigner. Meat Loaf over a large fry and gravy.  Irene Cara. Michael Sambello. Men at Work. The only franchise we had for years was a Dixie Lee. It was the go-to for fried chicken. Confederate chicken for the Great White North.

Today all restaurants in town close at 9 pm except for the Tai Pan Chinese restaurant which stays open until 11 pm (unless it’s quiet, then all bets are off).

For those times when it occurs to me that I am famished, it’s usually too late for takeout-on-impulse, and there’s no way to get my hands on a 3-piece snack without having to drive 45 minutes west through the heart of darkness and into The City. I like that our town, so far, has been spared fast food franchises. We’re a town of slow eaters. These are just some of the franchises we don’t have:

We do however have a run-down bowling alley that cooks up some mean chicken and wedges. It closes at 9 and is open only 3 days a week, which is a good thing for me.