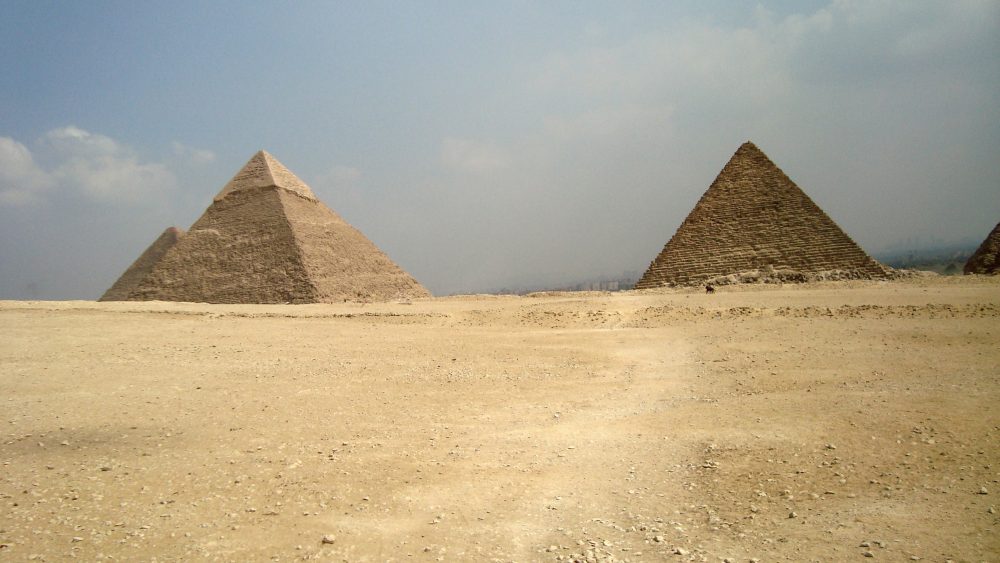 The Great Pyramid of Giza is the oldest and largest of the three pyramids in the Giza pyramid complex. Today it is owned by a land developer who scooped up the three deeds in an Estate Sale. He says pyramids are cheaper when you “buy ‘em in bulk”. He told the auctioneer that he intends on sweeping up around the bases, tossing up some curtains and flipping them for a quick buck. Apparently he is already in negotiations with a potential buyer who plans on renovating the “big” one into the “largest Starbucks on the planet.”

The pyramids of Giza were built a while ago. They predate the internet and TV Bingo. They’re still there. You can visit them hopefully before they build roller-coasters around them.  You can touch them, and if you like, try and push them over. Good luck. They weren’t built by aliens. They were built by people. A lot of them over a long period of time. Their tangibility is rooted in rock and is not going anywhere soon. 5 million massive blocks of limestone. There is something comforting in this. There is something comforting in tangibility. If it doesn’t give off a taste, a smell or a tactile sensation. Smooth. Rough. Gritty. Heavy or light.

I took a pretty good digger the other day while leaving a convenience store. In this context a digger can be defined as: ‘slipping in a spectacular fashion before falling onto the ground / floor, preceded by panic and flailing of the arms and whatnot’. You can take a head-first digger, or one that sends you backwards, depending on which direction your feet decide to take before stumbling out from under you.

I’ve taken diggers that has sent me face first down to the ground as well as ass backwards. I’ve seen people take diggers. I’m 48 years old, so in accordance with the law of averages, you will see more people take diggers the longer you live, unless you live alone in a cave or some type of crypt with a door. Diggers are not pretty. And the face people make during that flash of panic — that acute feeling of terror, knowing that in less than a second, you will be down on your face or butt, is something that sticks with you almost as much as the face they make while looking around to see if anyone saw them face-plant.

The most memorable digger I’ve ever taken was while crossing a street at a pedestrian crosswalk. It was during the winter, and the snow that had fallen the night before was now a jaundiced buttery mixture of salt, sludge and yellow goopy muck coating the road’s surface. I was holding my car keys, and I did that thing where I strolled super-cool past the traffic that had stopped but for some inexplicable reason, as I neared the curb I broke out into a bit of a wonky speed-walk, which is weird as I wasn’t in a rush. As I approached, I stepped on a discarded chip bag (Doritos) which acted as a foil super slider. I fell backwards with both arms wind-milling, I went down hard. The keys I had been swinging moments earlier were launched. For the record: It’s impossible to make a digger of such depth look cool. There’s no recovering from that. Plus, I really hurt my coccyx.

But, the recent digger* (refer pack to paragraph #3) after exiting a convenience store was not nearly as extreme. I actually found my footing preventing a full on face-plant. But I did manage drop the loose change I still had not pocketed from my purchase of a medium coffee and some discount jerky. There was a toonie and a few quarters. There’s something about toonies that make them seem way more significant and valuable that just the minted coin’s face value of $2 CAD. I’ve dropped pennies and nickels without the urge to pick stop, stoop and scoop them up. I may pick up a dropped dime under certain optimal conditions. A quarter? It’s more than likely. A loonie or toonie? No question. No hesitation. I am obligated to pick up. This is hard minted currency. These coins have weight. They are tangible. Cold, hard coins. They are keepers. They will stand the test of time. They are collectables and if tossed into enough glass pickle jars over a decent period of time one may accrue enough solid dough to buy a pyramid (one of the many fixer uppers still hidden under foliage throughout the Central and South Americas).

If I literally fell and virtually lost all my bitcoins, I wouldn’t even notice, nor would the person laughing and pointing at me from across the street.