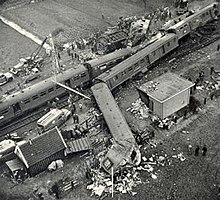 1962 – Netherlands – The Harmelen train disaster, the deadliest railway accident in the history of The Netherlands, occurs when Utrecht – Rotterdam express train driver misses a warning signal in fog and passes a red signal to collide nearly head-on with another passenger train from Rotterdam to Amsterdam. 91 people (including both drivers) die, 54 are injured of which 2 lost their lives while in hospital.