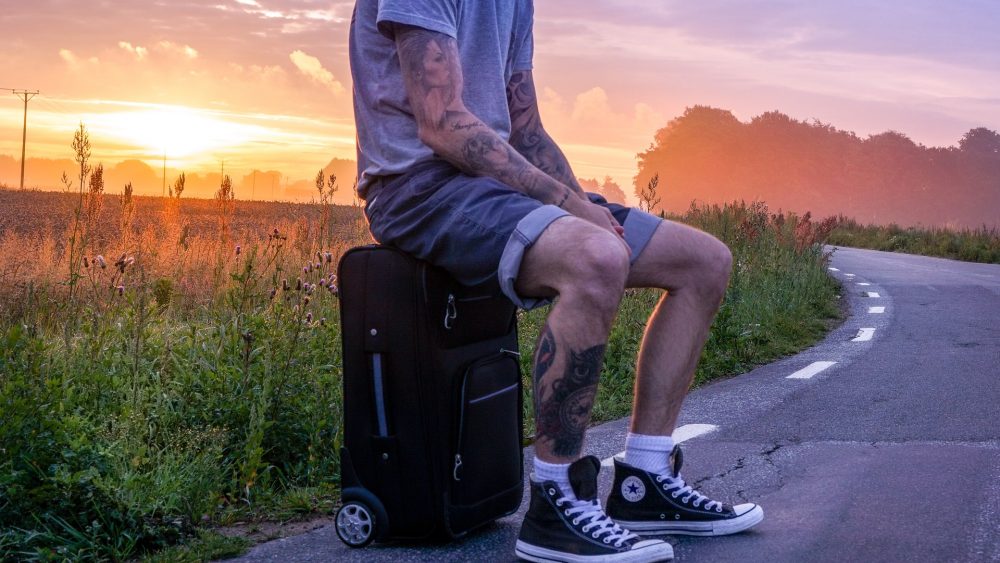 A Hitchhiker’s Guide to British Columbia and War & Peace

Yesterday on my drive home from work I noticed a man standing off the opposite lane with his thumb out. Didn’t give it much thought. This morning on my drive into work I spotted him in the same spot. Today, since we were heading in the same direction, he was now facing me I was able to see his cardboard sign. It was cold. I could see his sign but couldn’t see his face. He was wearing a balaclava and bulky layered clothing. VICTORIA BC. Man. Now that is a bit of a trek. It would be like winning a hitchhiking lottery if this traveller was picked up by a long haul trucker who was transporting plastic novelty lobsters from St Johns, Newfoundland to Victoria, British Columbia. Those days are over. No one buys plastic lobsters anymore, and now for insurance purposes and our hyper-propensity for litigation, 99% of truckers are not permitted to pickup hitchhikers. I was only going about nine seconds past him, so although yes, I could have picked him up and cut a few hundred feet off his trip, I figured it would probably just piss him off more than anything. Staring straight ahead I drove past avoiding eye contact. I used to feel obligated to pull over and apologize for not picking up whoever was thumbing their way somewhere.

Then I did some lightning-quick calculations in my head: Okay. Let’s say he’s going to Victoria, British Columbia, hypothetically for argument’s sake. Okay. Using my home address as a literal starting point, I determined that it is exactly 4,553 km from my place to that ‘Welcome to Victoria’ sign. I am like Rain Man when it comes to deducing distances in milliseconds. Trust me. Okay, so that calculation is based on a rambling scenic route west out on The TransCanada Highway 17, resisting any sudden urge to B line it by dipping through a few of the northern States. Okay. Now, if one were to drive non-stop at an average speed of 90 km/hr through optimal weather conditions, making small allowances for 2 to 3 possible roadwork projects, it would take 53 hours. But this was obviously not an option or he wouldn’t be standing on the side of the highway, looking like Lot’s wife after glancing back at Sodom. Now, should he be in no rush whatsoever, he could conceivably walk it in just under 825 hours; kill two birds with one stone. Why stand in one spot while counting on the kindness of strangers? Why wait for a ride? Walk while you wait, and the worst possible outcome is you eventually arrive at your destination, albeit a little later than anticipated. I mean, I first spotted the hiker at 4 pm and saw him again in the same spot 16 hours later no closer to British Columbia. Kerouac would have been there by now.

There was a time when I’d stick a thumb out for short bursts from North Bay into Mattawa. About 75 kilometers. This was a common leg for hitchhikers, where the North-South Highway 11 hooks and morphs into the East-West TransCanada Highway 17. I’d make my MATTAWA sign on a piece of cardboard with a big fat smelly black Magic Marker and just hang tight, it usually wouldn’t take very long. Within maybe ten to fifteen minutes I’d have a lift. I’d walk while waiting to show that I was committed to my journey.

“So now . . .  you can go up on a steep hill . . .  and with the right kind of eyes you can almost see the high-water mark—that place where the wave finally broke and rolled back.”  ― Hunter S. Thompson, Fear and Loathing in Las Vegas

Commuting for years I’d pick up hitchhikers, depending on a couple of things: their improvised signage, their looks (yes – I did judge many books by their covers), how many people thumbing (two was usually my limit. A cluster of faux-hippies and a Rottweiler had zero chance). Back then, and clear through the 1990s still fostered the lure for hitchhiking. The glory years. It seems like it was eons ago on a planet far, far away. I met some very interesting folks with fascinating backstories, all of which I somehow greedily stole for characters and anecdotes for novels, short stories, song lyrics etc. As a writer of zero note, it’s amazing how much material just wrote itself for me and how much stuff I just simply could not make up. Truth is stranger than fiction. Just gotta look for it.

Tolstoy used to write in public squares as the faces inspired him. He wrote War and Peace. I write in a bunker. I wrote Tuesday from a ’78 Skylark. With a menacing and intimidating page count of 1,140 and a physical weight of 26 pounds (English translation) War and Peace sold a few billion copies and is still in print. Tuesday from a ’78 Skylark sold somewhere between 15 and 26 copies with a page count of about 350. It weighs less than a pound due to the cheap pulp. My publisher burned all the unsold copies for a three-day pig roast he hosted in Toronto. I should have nabbed Tolstoy’s literary agent instead of my Uncle Wallace who has not donned any kind of shirt in his house since 1978. If he leaves the house, he will put on a shirt but will take it off as soon as he returns home.

Things began to change towards the end of the millennium when I started growing weary. The stories became darker. I picked up one dude who saw my KISS Destroyer CD on the dash, and without asking, popped into the in-dash CD player then jacked the volume. I was driving a KIA Sportage back then. I had a decent stereo installed since I would be spending half of my waking hours behind the wheel and between the ditches. Although stereos do go to 10, they shouldn’t. Boxed in a toaster oven on wheels, the volume was ear-splitting. I’d reach over and turn it down. He’d reach over and turn it up. I’d turn it down. He’d turn it up. By the end of Detroit Rock City, the speakers blew with an explosive POP. Damn.  I stopped picking up hikers altogether after a lone traveller, who instead of being appreciative of the ride I gave him and stimulating conversations, hinted strongly that I should drive him a little farther. I did. Then when I did pull over at a restaurant fifteen minutes past my house, he hinted strongly that I should give him a few bucks. I did.  No I have no problem passing a bulky dressed man wearing a black balaclava with a cardboard sign with BC scrawled on it.