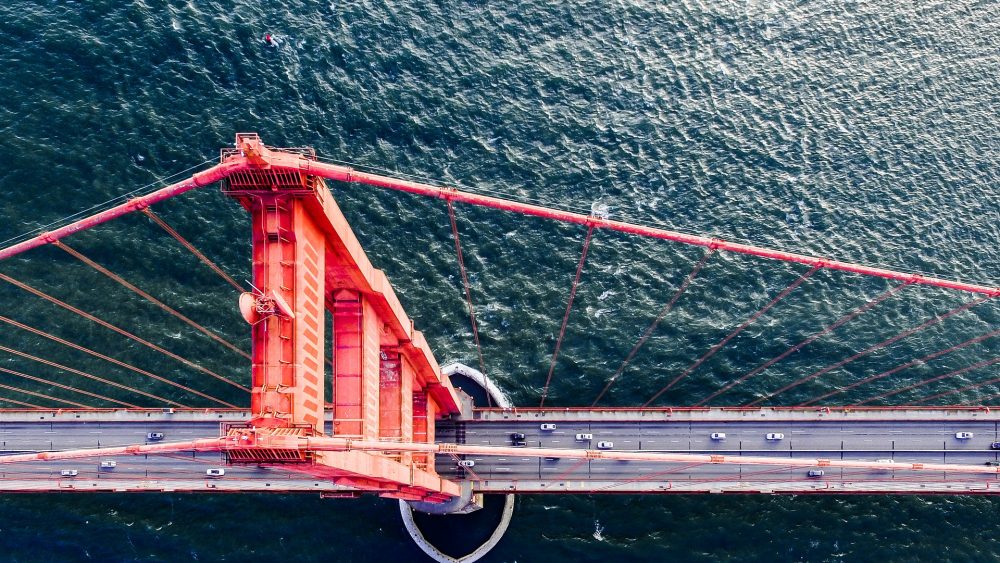 Prior to the bridge’s construction, the only way to travel between the above-mentioned locations was via ferry. Notwithstanding the need for the bridge, the concept of it was strongly opposed.

The public, city officials and environmentalists voiced concern regarding the cost associated with the bridge’s construction, and the environmental impact. Many members of the engineering community claimed that the bridge would be, technically, impossible to build.

Despite the concerns, construction on the bridge began on January 5, 1933.

Construction of the 4,200-foot-long bridge (a suspension bridge supported at each end by cantilever trusses) began with many challenges: heavy winds and fogs, as well as strong ocean currents.

44,000 tons of steel was used to construct the bridge’s two towers, which sit at 746 feet tall (the tallest bridge towers in the world when the bridge was completed). For the construction of the south tower, divers had to be used to remove material down to the bedrock, position the forms, and place concrete.

Work began on the each of the peninsulas, building out over the Bay. On November 18, 1936, the two arms met in the middle at approximately 250 feet above the water’s surface.

At the time of construction, fatalities for bridge projects of this scale were anticipated. The rough formula worked out to approximately one death per $1 million spent on the project. With an anticipated cost of $35 million, 35 deaths on site was deemed ‘reasonable’ considering the scope of the bridge work.

Chief Engineer, Joseph Strauss, was vitally interested in the health and safety of his workers. Numerous precautions were taken to ensure the well-being of the construction crew, including mandatory respirators for workers using lead-based primer and paint, headlamps to increase visibility in dark conditions, and wind goggles to improve visibility and protect eyes.

Strauss also mandated the use of hard hats, making the project America’s first construction site where hard hats were required.

In addition to the above-mentioned precautions, Strauss also had an innovative safety net installed under the bridging of the deck. The device saved 19 workers during the construction of the bridge.

A total of 11 fatalities occurred during the construction of the bridge, 10 of which were a result from the same incident: scaffolding fell and broke through the safety net.

Since its opening to the public, May 27, 1937, the Golden Gate Bridge has been one of America’s most recognizable structures.

Nearly 2 billion vehicles have crossed the bridge since its construction.