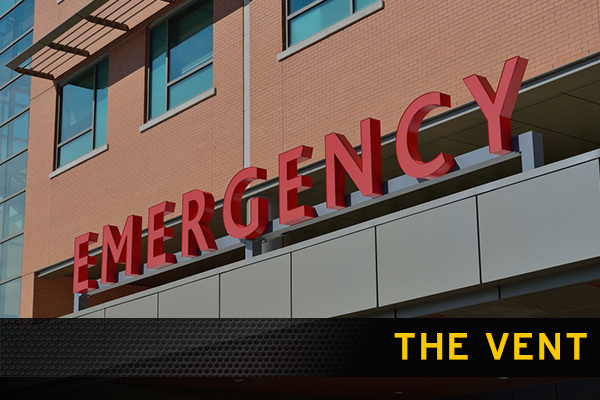 I’ve been in the hospital on a number of occasions. Not all at the same hospital. Admissions have been spread out over about 25 years for various reasons, some quasi-serious, some just a pain in the ass (not literally). The first time I ended up in a blue gown that left quite a breeze on the back porch, was when I was an undergrad at university. I was given penicillin to combat my yearly battle with tonsillitis. Up until that point, penicillin was always good to me, then for whatever reason, it turned on me. Now, along with two massive marbles dangling from my throat, I had hands the size of boxing gloves, and a face that ballooned to comic proportions. I went to the local ER. They took a quick eyeball at me and gave me something to counter the adverse reaction to the penicillin. It was some type of super-antihistamine not yet tested on humans but apparently worked wonders on horses. I was then sent on my way. At the time, I was living with a friend who was finishing up his Graphics Program at the local college. While he was away in class, I stayed in my room, laid flat out with feverish dreams. I had been listening to a little Frank Zappa, and a snippet of the song ‘Flakes’, continually looped in my head while I sweated it out trying to exorcize the penicillin

The sun would come up and then go down. The room would get light then the room would get dark. One evening my pal poked his head in and gave me a Italian sausage on a little white plate. He asked if I was “cool” as I still looked a little gnarly. He also told me that I’d been in bed for three days. I had lost all concept of time. My girlfriend came in to check on me. She was a nursing student and is now my wife and still a nurse. She had been out of town while this all went down. Looking at me, she was mortified. She asked my buddy why he didn’t take me to the hospital. “Look at him! Does he not look sick to you?” He looked a little sheepish and said that he thought if I ate the Italian sausage he made (now a few days old) I’d probably feel much better. She took my temperature which may have been a few degrees hotter than the surface of the sun and spun me back to ER where it seems I reacted to the new super-horse medication they gave me to counteract the penicillin. Diagnosis? Blood poisoning. Then I don’t really remember much as I was in this twilight fevered state. They admitted me but there were no beds in the adult ward so they parked me a room for kids. When I came to, I opened my eyes. The first thing I noticed through blurred vision was a massive poster of Snoopy. Not Snoop Dogg, but Snoopy from Peanuts cartoon strip. I looked at Snoopy. Hum. Then there was Woodstock, his bird friend. I looked over next to me. There was a kid with a leg in a shockingly white cast hoisted up on some type of pully system. He was I think about ten years old. He was reading Archie comics. We got on pretty good before I was moved out of the kids ward into a ward with grownups. There were no characters from Peanuts in this room and the conversation was stale. I was discharged after a few days of IV stuff and sent home with some steroids to finish up with getting me back to tip top shape. Turns out I’m allergic to steroids. Damn.

Since then, my Check Engine light has gone on a few different times for things like kidney stones and whatnot. I have a whack of kidney stones and they’re in no hurry to leave unless I’m doing something interesting. They can real ruin a gig. Ultrasound shows about 10 of them still in there just waiting to mess with me. One is the size of a globe. Not those little desk globes but the massive ones that you see on television in some old man’s study. They may need TNT to blast that one.

Most recently I was in for a few days for another tune up. I read The Idiot by Fydor Dostoyevsky. Some books require total isolation to and time to commit. My wife brought me a few bags of Ringolos and I fashioned a little ice bucket for Pepsi. Turns out this hospital does not offer Ringolos and Pepsi. Hum. I should have asked first. But as of today, my Check Engine light is off for now and I’m all tuned up. I had an oil change and a total realignment. I still have the odd shimmy here and there but what the hell. I got some mileage on me so it’s to be expected. Not ready for the junkyard yet.