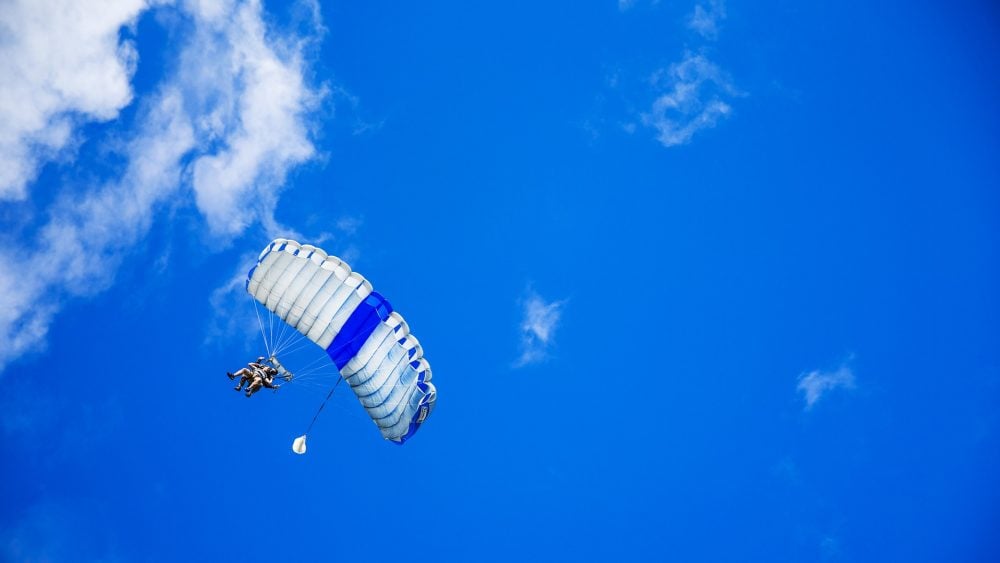 DeLorean, Denim, Danger and Back in Time

It was while attending university in Toronto during a post-exam shindig, when he suggested I call and make us all reservations to pay money to go up in a plane, and then jump out of the same plane while strapped to a black bag containing a yellow parachute, so then we could all float down gracefully to earth, presumably feet-first in an open expanse of soft, fertile ground as opposed to coming in hot and hard onto a concrete splash pad in a theme park nine kilometers off from where we were supposed to land. (Exhale)

The guy who suggested this impulsive skydive, handed me the phone book. He was from Montreal in Toronto studying business. He drove a DeLorean with the seagull wing doors. It was shimmering silver, at one point in time – just, not at this point in time. The car’s finish was a dull-greyish matte, and the frame was pockmarked with dents. If fellow students complimented him on the ‘cool car’, he’d readily say it was his, and he paid cash for it. If people mocked the car outright, he’d say someone gave him the car. Most people I knew at the time mocked the car. He wore a Levi’s denim jacket with the collar flipped up; his smothering attempt to impress smacking of effort and possibly a shaky sense of self. He insisted on one occasion that he take me for a spin. I had very little say in the whole thing, and before I realized what was happening I was buckled deep into to this thing, cruising around a part of the city that people driving old DeLorean’s shouldn’t be driving. He honked the horn at one stoplight, in a vainglorious attempt to get noticed by two ladies in a topless Jeep. We did get noticed. It was a cringe-worthy moment copped straight out of a hundred clichéd Spring Break themed movies. I tried to shrink down further into my seat, but the DeLorean rode so low I was essentially sitting on the street anyway. He asked me where I wanted to go. “We can go anywhere, even back in time,” he laughed. “How about just BACK?” I asked. He laughed again. With the prospect of being forced to ride shotgun aimlessly around Toronto, I asked him to bring me to a used record store that was a pain in the ass to get to by transit. Make lemonades from lemons. I bought about 80 bucks worth of vinyl that day while he talked to women. He was a nice enough dude when he didn’t try so hard to be anybody but himself.

So, let’s go back in time to this post-exam shindig. He was working overtime to be the party’s Master of Ceremony. That’s when he found the business in the Yellow Pages, and circled the small squared ad of an cartoon eagle with goggles. Shaking my head, I dialed and arranged for six of us to jump out of a plane for three days later.

The Yellow Pages was (still is?) an actual hard-copy of a soft-cover 8.5” x 11”, 13 lb reference book that listed (lists?) landline phone numbers and addresses of businesses. Smaller towns had (have?) their own phonebooks, combining the White Pages (residential) and the Yellow Pages (commercial) in one book along with the Blue Pages, which listed (lists?) provincial and federal Government Agencies in a typical Kafkaesque fashion, rendering that whole skinny section indecipherable.

Now, I’m going to fast forward in time to the real life-lesson of this cautionary tale: Don’t book a skydiving trip during a post-exam shindig after caving in to pressure from a guy from Montreal studying business who drives a dull, beat-up DeLorean that may or may not actually belong to him, and that bravado fuelled by the adrenalin of surviving exams mixed with any variety of libations can make even the most absurd proposition seem somewhat sensible at the time.  (Exhale)

Naturally, the next day without even talking to anyone, I cancelled on the group’s behalf. Interestingly, no one ever brought up that whole thing. Not even the DeLorean dude said “Hey, what day is the big jump, again?”  Nothing from nobody.

Just as well as I would have surely chickened out. Left to my own devises, while plummeting in a freefall I would manage to screw up the only action required. The Pull. If someone were to assume that one responsibility for me, I’d probably have a go. Back then. Not now. But that doesn’t mean I am void of bravado. Since the Edgewalk attraction at the CN tower opened a few years back, I was convinced that I’d have no problem doing this. What is it, you ask?

‘Toronto’s tallest attraction has adventure lovers taking a walk OUTSIDE – around the circumference of the roof! So, do you dare to test your limits and experience the thrill of a lifetime?’- CNTower.com

That’s what the Edgewalk is. I don’t get ‘round them there parts often, but this September I will be parked a few feet from this place so I had started asking the people travelling with who would come with me on the Edgewalk. “My treat.” It was a resounding “No.” I was a little relieved, as down in my heart, I’m sure I would have been terrified, and ultimately chickened out. I got nervous when they started pressing me to do it and they’d possibly watch from the parking lot. Hum. Thankfully the price to pull off the Edgewalk turned out to be as high as the Tower itself, giving me the perfect excuse. “Not for that price!” They offered to pool their money to get me up there, but I dismissed it on principle. If I am anything, I am a man of principles.