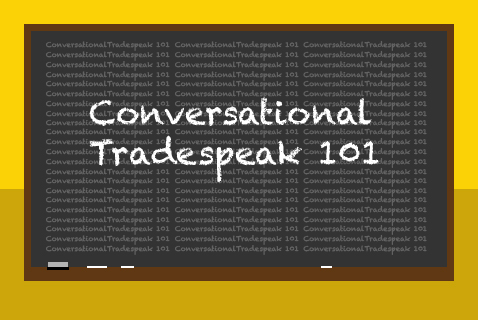 Definition: The hinged, movable part of a type of shut off valve that prevents or shuts off flow. A common type of flapper is found at the bottom of a toilet water tank. It is raised to start the flush cycle and closes when the tank is empty, allowing it to refill.

Proper usage: “I was going downstairs with my new flapper for the toilet. Then after I replaced the old flapper with the new flapper, I took the old flapper and threw it over the fence into my neighbour’s lawn. He has a massive pile of old flappers in the centre of his yard. He refurbishes them and sells them online.”

Improper usage: “I’m so hungry I could eat a pile of flappers.”

Proper usage: “Hey Phil. Your strong butt joints are the talk of the town, man. You are a champ!”

Improper usage: “I was minding my own business when these kids started making fun of my butt joints. Kids can be so cruel.”

Definition: “Traditionally a carpentry term used to describe a carpenter who has completed their apprenticeship in the local union, but also anyone who has many years experience and is considered to have paid their dues in the trade.

Proper Usage: Gary was fortunate to learn from the best. As an apprentice, he worked under Alex, a journeyman of about 40 years.

Improper Usage: “I saw Journeyman at Madison Square Gardens in 1978. The band was awesome. Snagged two tickets from scalpers. I brought my sister. She loves Steve Perry.”

Definition: A pair of steps or ladders accessible to pedestrians but generally inaccessible to animals. Stiles allow access to fields or other areas enclosed by a fence or wall. Unlike a gate, there is no chance of forgetting to close it.

Proper Usage: “Wendy’s giraffe is so smart he stepped right up the stiles over the fence and ran amok ending up at the mall where he kicked over a hot dog cart.”

Improper Usage: “My kid’s room is a pig stile. He’s 24 which is annoying.”