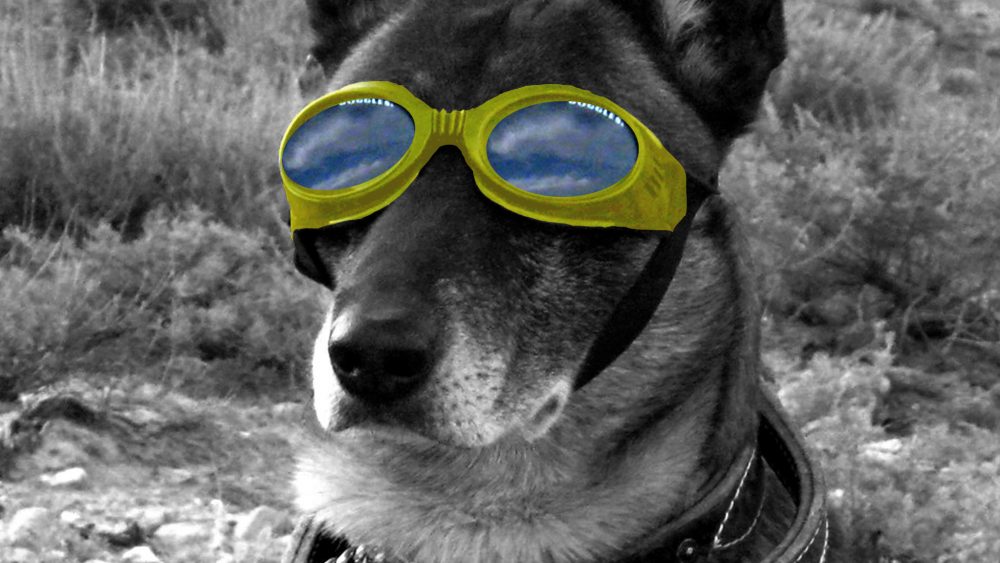 There are many things one does not see every day. A man zipping past at Mach V in one of those squirrel bird suits.  A train going through a Tim Hortons drive-thru. A camel hanging around the shopping mall smoking cigarettes and trying to look cool. Those kinds of things. But, keep your eyes peeled long enough and you will see the damndest things.

At a red light on a three lane highway, a badass motorbike rumbled up beside me. I don’t know much about bikes except there are really only two kinds: badass ones that make a big rumble and the other kind that make high pitched screams and zips. This motorbike was a badass rumbler. The rider had a badass black helmet with badass glasses and more leather than the S&M dude from the Village People, once so popular with the hip kids; the one with the bushy black handlebar moustache. Then I noticed that this lone rider on the storm was not alone at all. And to be honest, there was no storm to speak of. Yes, there was a bit of cloud cover but nothing ominous. No, he was not alone. There was no motorcycle momma on the back, but there was a passenger in a sidecar. Non-human. Camel? No. Canine? Yes. It was a big happy looking doofus dog. It took me a minute to process this mad scene. The dog, which looked like a silly type dog with a big bricked head, was sitting comfortably in the sidecar, geared up with a sun-baked brown leather-type aviator hat and yellow aviator goggles. He was sitting relaxed with his long pink dog tongue hanging out and down, panting happily. Outstanding. The traffic light turned from red to green as is the pattern. The bike rumbled up ahead of me. After a few kilometers (or miles for our American friends,) down the highway I followed the bike, both of us pulling into the same gas bar. We met at the pumps.
“That dog is outrageous,” I said to the Son of Anarchy.

“I bet he’s good at keeping secrets,” I joked. The Son of Anarchy guy laughed.

The biker was not a Son of Anarchy. He had no menacing patches at all, although the bike was a Harley Davidson. He was a mechanical engineer from Thunder Bay on a summer road trip to visit his son living east of Toronto. The dog’s name was Sonny Bono (no kidding) and has travelled with him in the sidecar since he was adopted as a pup. Sonny Bono doesn’t move around. He has some type of three point restraint apparatus, a leather helmet and those jaundiced goggles. When the weather turns inclement, there is a little plastic cockpit roof that protects Sonny Bono from the elements. The rider’s wife is a geologist and is currently doing something geological in Russia for an international mining company. She has her own Harley and typically they all travel together with Sonny Bono riding shotgun. Life is a highway. I gave him a Hard Hat Hunter sticker. So, the next time you are idling at a traffic light and a badass rumbling hog pulls up alongside you and there’s a leathered up rider with a big dopey looking dog in a sidecar wearing a sun-baked brown leather type aviator hat with yellow goggles, shout “HEY SONNY BONO!!” and look for that Hard Hat Hunter sticker

Life is a highway. Keep it between the ditches and look for the dog in a sidecar.